I’ve never been able to “get” Privacy as a policy issue. Sure, I can see that there are plausible nightmare scenarios, but most people just don’t seem to care. What a company, or a government, knows about one just doesn’t rate as something to worry about. Perhaps the only angle that might get the pulse racing is identity theft; losing money matters. But no identity theft stories have inflamed the public’s imagination, or mine.

The recent spate of stories about privacy on social networking sites have led me to reconsider – a little. I still don’t think Joe Public cares, but the technical and policy questions of networked privacy intrigue me more than the flow of personal information from a citizen to an organization and its friends.


The trigger for the current round of privacy worries was the launch of Google Buzz. Good Morning Silicon Valley puts it in context with Google, Buzz and the Silicon Tower, and danah boyd’s keynote at SXSW 2010 reviews the lessons and implications.

Mathew Ingram’s post Your Mom’s Guide to Those Facebook Changes, and How to Block Them alerted me to the implications of Facebook’s “Instant Personalization” features.

Woody Leonhard’s article Hotmail's social networking busts your privacy showed that Google and Facebook aren’t the only ones who can scare users about what personal information is being broadcast about them.

I think there may be a profound mismatch between the technical architectures of social networking sites, and the mental model of users.

This mismatch is an example of the “hard intangibles” problem that I wrestled with inconclusively a few years ago: our minds can’t effectively process the complexity of the systems we’re confronted with.


We assume that information about us flows more sluggishly there further it goes. My friends know me quite well, their friends might know me a little, and the friends-of-friends-of-friends are effectively ignorant. In a data network, though, perfect fidelity is maintained no matter how many times information is copied. We therefore have poor intuition about the fidelity with which information can flow away from us across social networks.

It’s a truism that the mind cannot grasp non-linear growth; we’re always surprised by the explosion of compound interest, for example. On a social network, the number of people who are friends-of-friends-of-…-of-friends grows exponentially; but I would bet that most people think it grows only linearly, or perhaps even stays constant. Thus, we grossly underestimate the number of people to whom our activities visible.

My most recent personal experience was when I noticed a new (?) feature on Facebook two days ago. One of my friends had commented on the status update of one of their friends, who is not in my friend network. Not only did I see the friend-of-my-friend’s update; I saw all the comments that their friends (all strangers to me) had made. I’m pretty sure the friends-of-my-friend’s-friend had no idea that some stranger at three removes would be reading their comments.

If you find the “friends-of-my-friend’s-friend” construct hard to parse, then good: I made it on purpose. I suspect that such relationships are related to the “relational complexity” metrics defined by Graeme Halford and colleagues; Halford suggests that our brains max out at around four concurrent relationships.

I’m pretty confident that the Big Name Players all just want to do right by their users; the trouble is that the social networks they’re building for us are (of necessity?) more complicated than we can handle. It hit home when I tried to grok the short blog post Managing your contacts with Windows Live People. I think I figured it out, but (a) I’m not sure I did, and (b) I'd rather not have had to.
Posted by Pierre de Vries at 2:52 PM 1 comment:

Knowing with the Body

The neurological patient known as Emily cannot recognize the faces of her loved ones, or even herself in a mirror. [1] She doesn’t have conscious awareness that she knows these people, but her body does. When she is shown a series of photos of known and unknown people, she cannot tell them apart; however, the electrical conductance of her skin increases measurably when she’s looking at the face of someone she knows. [2] It’s not that she’s lost the ability to recognize people in general; she can still recognize her family, and herself, by their voices.

Damasio notes that skin-conductance responses are not noticed by the patient. [3] However, perhaps someone who is well-practiced in observing body sensations – for example, a very experienced meditator in the Burmese vipassana tradition [4] – would be able to discern such changes. I suspect so; in which case, a patient like Emily would be able to work around their recognition problem by noting when their skin sensations change. It’s known that they use workarounds; Emily, for example, “sits for hours observing people’s gaits and tries to guess who they are, often successfully.” [5]

Both Damasio’s theory of consciousness and Burmese vipassana place great importance on the interactions between body sensations and the mind. As I understand Damasio, he proposes that consciousness works like this:

1. The brain creates representations (he calls them maps or images) of things in the world (e.g. a face), and of the body itself (e.g. skin conductance, position of limbs, state of the viscera, activity of the muscles, hormone levels).

2. In response to these representations, the brain changes the state of the body. For example, when it sees a certain face, it might change skin conductance; when it discerns a snake it might secrete adrenaline to prepare for flight, tighten muscle tone, etc. Damasio calls these responses “emotions”, which he defines as “a patterned collection of chemical and neural responses that is produced by the brain when it detects the presence of an emotionally competent stimulus — an object or situation, for example.” [6]

3. In a sufficiently capable brain (which is probably most of them) there is a higher order representation that correlates changes in the body with the object that triggered these changes. This second-order map is a feeling, in Damasio’s terminology: “Feelings are the mental representation of the physiological changes that characterize emotions.” [6], [7] Feelings generate (or constitute – I’m not sure which…) what he calls the “core self” or “core consciousness”.

Since I find pictures to be helpful, I’ve created a short slide animation on SlideShare that shows my understanding of this process; click on this thumbnail to go there: 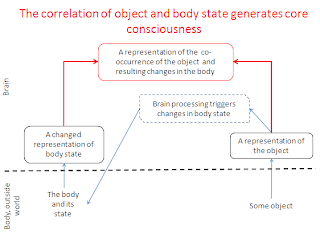 In Emily’s case, steps 1 and 2 function perfectly well, but the correlation between a face and changes in the body fails in step 3. The higher-order correlation still works for voices and body changes, however, since she can recognize people by their speech.

More acute awareness of body sensation might not just help clinical patients like Emily. In the famous Iowa Gambling Task, Damasio and Antoine Bechara showed that showed that test subjects were responding physiologically (again, changes in skin conductance) to risky situations long before they were consciously aware of them. A 2009 blog post by Jonah Lehrer includes a good summary of the Iowa Gambling Task and its results. Lehrer reports new research indicating that people who are more sensitive to “fleshy emotions” are better at learning from positive and negative experiences.

[1] This post is based on material in Antonio Damasio’s book The Feeling of What Happens: Body and Emotion in the Making of Consciousness (Harcourt 1999). Emily’s case is described on p. 162 ff. I also blogged about this topic in 2005 after reading “Feeling” for the first time.

[6] Damasio, A. (2001) "Fundamental feelings", Nature 413 (6858), 781. doi:10.1038/35101669. Note that Damasio’s definition of “emotion” is narrower than usual usage, which refers to affective states of consciousness like joy, sorrow, fear, or hate. Damasio limits himself to the physiological changes which are more typically considered to be an accompaniment to, or component of, these mental agitations.

[7] Feelings so defined seem to correspond to what S. N. Goenka, a well-known teacher in the Burmese vipassana tradition, calls sensations, his preferred translation of the Pāli term vedanā, also often translated as “feelings”. There is some debate about whether vedanā refers just to sensations-in-the body, as Goenka contends, or to any and all pleasant, painful or neutral feelings such as joy, sorrow, etc.
Posted by Pierre de Vries at 1:52 AM No comments:

SiliconValley.com reports that the US House has approved a measure that would outlaw deceptive Caller ID spoofing.

Since I'm currently enamored of a principles-based approach to regulating rapidly changing technology businesses -- that is, policy makers should specify the goals to be achieved, and delegate the means to agents nearer the action -- I'm on the look-out for working examples.

This seems to be one: the bill leaves it up to the FCC to figure out the details of regulation and enforcement.

The FCC itself could delegate further if is so chose, for example by waiting to see if telephone companies come up with effective ways of regulating this problem themselves before trying to devising and imposing its own detailed rules.
Posted by Pierre de Vries at 2:24 AM No comments: